Run It Out – the Robin Arzon story

It won’t come as any surprise to those who know Like the Wind magazine, to read that we love stories. After all, stories are the reason we started the magazine in the first place.

So when we heard about a new film telling an extraordinary story of a woman who has overcome a huge number of challenges, thanks in part to her love of running, and who was about to embark on a challenge that would push her to the limits, in order to raise money for a charity dealing with a life-changing disease that her mother was living with, we knew that we had to support that.

The film is called Run It Out and the woman at the heart of it is called Robin Arzon.

At the moment the team behind the film are looking to raise money on Kickstarter to fund its completion. They have a target of £15,000.

We had a chance to talk to the film-maker, Tara Darby, about Run It Out – what it means to her and Robin and how the film came about. This is a little exclusive interview here and if you like the story of the making of the story, we would encourage you to go and check out the Kickstarter page and back this project.

How did you first meet Robin and what attracted you to her story?

A friend of mine came back from Run Dem Crew one evening and told me that she’d met this girl who’d come to visit from the BridgeRunners in New York and in her words ‘both men and women fell in love with her’.

Her description stuck with me and about a year later I discovered Robin’s blog and Instagram and realised it was the same girl. I had just started running again a few months after my first baby and was inspired by this strong female who radiated strength and positivity and was dictating her own terms. I had wanted to make a short film about running for some time but I was trying to work out my angle on it. Initially I thought I would shoot it in London but then I discovered Robin and everything changed. I emailed her to see if I could come to New York and make a short film about her. As luck would have it she wrote straight back and told me that she was also running the same half marathon as me in Paris so we met at the Bridge the Gap after party and then she came to London so we could discuss the project in more detail.

What makes Robin a special subject for a film?

Robin is unique because she has ripped up the rule book. She has completely blown the idea of distance out of the water. She refuses to conform and is brave enough to follow her instincts and not let obstacles stand in her way. She has suffered and overcome some extreme situations and has refused to let them destroy her life. In fact she has drawn strength from every hardship she has experienced.

What will people see when they watch the film?

They will see a strong woman living her life to the fullest. Someone on a continual quest to better themselves and shed layers from her past. Someone who lives boldly and likes to look good while doing so, very much in the spirit of an athlete like Flo Jo. They will also see her love affair with New York City, how important her friends and family are, the passion and commitment of the Bridgerunners. Then we travel to Utah and a whole new set of challenges present themselves- Robin undertakes a huge mental and physical challenge and is unprepared for the atmospheric conditions. People will also see the strength and support of the people around her. Robin’s mother, Carmen is a very important part of the film and the way she deals with her M.S diagnosis is incredible. The film touches on some complex issues but ultimately the message is a positive and empowering one.

Were you looking for a film project like this to work on? Why?

For some time I had been feeling a sense of unease. Photography is my life and the most important thing to me outside my family and friends but I felt I was changing and it felt very uncomfortable. I have always liked telling stories with my work and more recently have started combining writing and stills but I wanted to push myself into more unknown territory and tell a bigger story.

Having a baby was the best thing that had ever happened to me but it also shook my sense of self- it brought up some difficult issues from the past and having previously defined myself primarily through my work it was quite de-stabilizing to have to re consider how I was going to work and be a good Mother. Nothing that a million other women haven’t experienced but it was this feeling that made me want to get back to my bare bones and seek out a project I felt passionate about- something purely of my own with no commercial restraints. I personally found running to be transformative and could see how much it affected other people. When I found out more about Robin and her back story I thought she would be an incredible subject.

What were the logistical challenges of filming and making the whole project happen? 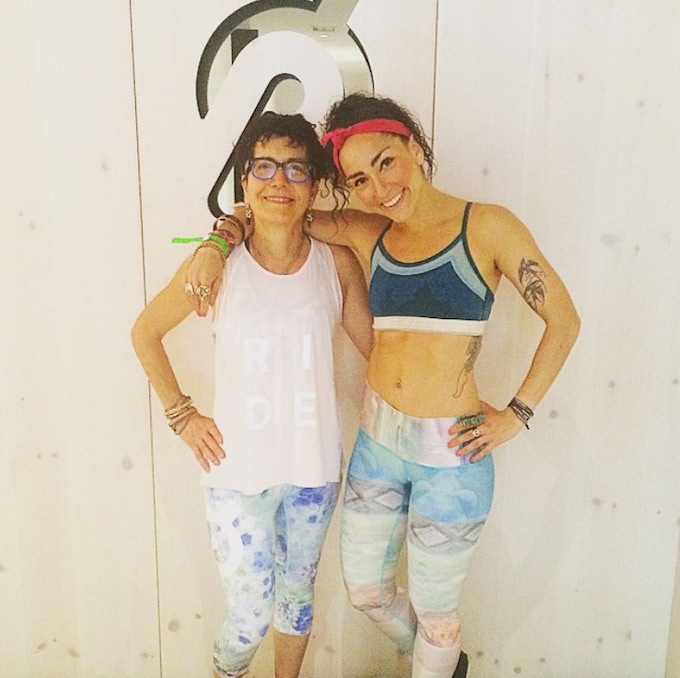 The main one was time. Had the film been the short I originally intended it would have been much more straightforward. But when Robin came to London she told me that in a couple of months she would be travelling to Utah to run five marathons in five days in aid of MS research. Robin’s mother Carmen was diagnosed with MS in 1999 so it is a charity close to her heart. As soon as she told me I knew that we had to film in both places. This was the biggest physical and mental challenge of her life so far and it would take place in this extraordinarily epic landscape, a complete contrast to the cityscape of New York. I knew this would be a once in a lifetime opportunity but I also understood I would have no time to raise the money I needed for the film so would have to be resourceful and innovative!

How did you decide that the film should be a full-length documentary rather than a short film as initially envisioned?

It became obvious as we started to edit and worked out a structure for the story. Utah becomes the backbone for the film as we slowly weave back and forth to New York and discover the traumatic events from Robin’s past.

What were the best and worst moments in the making of the film?

The filming itself was the best. Going to New York and being completely immersed in Robin’s life there – meeting her friends and running with the Bridgerunners. Utah was incredible- the most stunning landscape with hardly anyone around. We met so many incredible and inspiring people and also witnessed Robin’s strength as she underwent this immense and epic challenge. I have also loved crafting the film with my editor, Mark Whelan at The Quarry. It has been such a rewarding and creative process.

The hardest part has been other factors in the post-production. I had a challenging situation which delayed everything and almost threatened the future of the entire film. But I have learnt so much from the whole process and it’s just another reminder in life that nothing is easy and that is the point. You have to push yourself out of your comfort zone if you want to embrace change. Demolish everything, pick up the pieces, re-think, re-build and keep faith in your dream. It’s just like that point in a race where you feel you can’t go any further but you go inward, you find that strength you know you have and keep believing that you’ll cross the finishing line.

What do you and Robin hope to achieve with the film?

We hope that it will reach as many people as possible. We are entering it for festivals and planning screenings at the end of the year. My hope is that it will raise the profile of women’s running and fitness even further but the story is also a universal one and I hope it touches and inspires people to follow their dreams and resist the pressure to conform. We also hope that it will raise awareness about M.S. A devastating disease which still has no cure.

What do you now need to do to get the film released and how can people get involved?

We are launching a Kickstarter campaign to raise the final money we need so that we can finish the film. This will be used to pay for the music score, colour grading, editing, sound mix and production costs. We would love your readers to spread the word as far and wide as possible so that we can get this film out into to world. You can find out more information about the film on our website www.runitout.co.uk and contribute to the Kickstarter here.

Thank you so much!